What are you willing to put o stakes when the fate of all humanity depends on you? How much can you sacrifice for the greater good?

The game is about danger and mystery, about action and adventure where you will reveal secrets lost in the flow of time, you will discover the devious schemes of Dark Gods. The game is a game about preventing the doomsday clock from striking midnight for an entire galaxy.

The plot is set on a civilization that is separated from its actual origin, shattered by the great rift, and on the verge of extinction. The players will be playing the role of the savior who will try his level to improve human survival prospects in that shattered world. 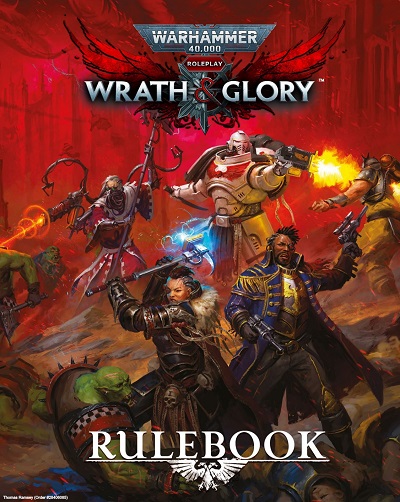 Tighten your seatbelts and allow us to give you a brief tour of the Warhammer 40k universe as we explore the mysterious realm.

The plot of the book is set on a late-1980 game called Warhammer 40k. The game was a huge success throughout the world and particularly in the UK.

Wrath and Glory is a 452-page long rulebook of the roleplaying version of the game Warhammer 40k originally published in September 1987 and the current version was released in July 2020.

An authoritarian empire ruled by humans called The Imperium of Man consists of nearly 1 million worlds and has been in existence for over 10,000 years and is highly advanced in technology. But there is no improvement in technology in the past few centuries as the Emperor was fatally wounded and remains in an unresponsive state with the help of advanced life support ever since. Its culture is based on highly religious ground. The people of the Imperium believe, in their ignorance that their Emperor is a god. And the citizens of the Imperium are taught to fear and hate the alien species.

Although, the emperor wasn’t able to give any direct command, yet, his mind is capable of generating a psychic beacon that helps navigate the starships throughout the galaxy.

Now, the game was taken to another level when Warhammer 40k was introduced to the audience in a new aspect, where gamers will have to play the role of savior of in the bleak foreboding of the 41st Millennium.  The game introduced the Gilead System which has been separated from the entire Imperium, trapped in silent darkness by sinister schemes and internal chaos of the gods.

The Rogue Trader Jakel Varonius, leader of a disparate and dedicated group of people doing things of utmost necessity to keep the Gilead System from extinguishing. In the game, the player will take on the role of one of those people.

The rule book contains everything that you will need to know about this grim and thrilling adventure into the darkness of the 41st Millennium. It contains information on characters, weapons, and acts as a complete rulebook for Wrath and Glory, and also includes Gamemastering advice, character creation options, and many more.

The world of RPG offers you to take your consciences to another level. Dark Gods scheming against humanity, a society plagued by corruption, an entire galaxy full of mysteries and danger and you have to fight for your existence. How will you encounter and tackle all that?

To answer the question one must enter the grim world of Wrath and Glory: Warhammer 40k and the best companion to your adventure you can think of is the Wrath and Glory rulebook.